By John Ito - August 10, 2011
Holding a brief session to solicit helps for the Diet to let themselves have Japanese citizenship, a couple of second generation Japanese Filipinos, Koushi Lamona (Japanese name: Masako) (67) and Sakamoto Leonardo (Japanese name: Takaru) (67), who are children of Japanese fathers from Kumamoto prefecture, who immigrated to the Philippines in pre-war period, arrived in Kumamoto, Japan. 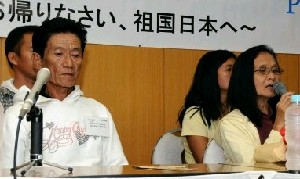 According to an PNLSC Philippine Nikkei-jin Legal Support Center, although 63 of Japanese Filipinos have gotten Japanese citizenship for now, there are still 200 of them, who are wanting to obtain the citizenship. As long as they reside in their home country, they must discard their nationality and citizenship to avoid being aimed by other people's attack under the name of anti-Japanese sentiment.

While they felt delight to come to their fathers' home, they choked up tears in telling their past in which they suffered from poverty.