Half of Fukushima Children Are Exposed to Radiation. 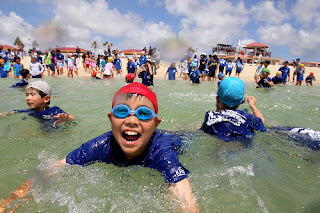 Fukushima children yelping with delight in Okinawa.
A shocking news is revealed. According to the study conducted on 1,000 Fukushima children, half of them are found to be exposed to radiation.
At the last conference of Japan Pediatric Society conducted in Tokyo, Satoru Tashiro, a professor of Hiroshima University, stated that their exposure doesn't jeopardize their lives soon.
The results will be sent to their parents next week.

For this issue, Japanese Net-users posted aggressively thoughtless and heartless comments on an electric board, aiming their attack on the innocent children who has been exposed to radiation.
Can they still have such thoughtless ideas as knowing the fact that the children resign themselves to living with the reality?

Chernobyl had already experienced a nuclear disaster way before Fukushima did; a number of sad stories, therefore, are reported and they could happen to Japanese, especially those who live in the prefecture. 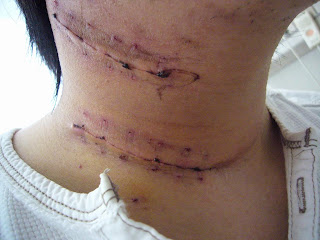 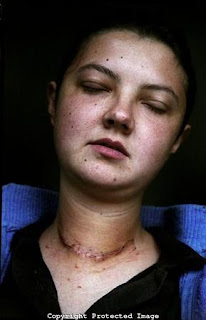 The ring-like scars on the people's necks in the pictures above are called, Chernobyl Necklace, which is an operative scar appearing after thyroid-cancer operation that will remain for the rest of their lives.
Source(s):
http://read2ch.com/r/news/1313222956/
http://www.asahi.com/national/update/0728/TKY201107270924.html
Chernobyl Fukushima Incidents Nuclear Disasters Photos Ukraine