Possible Candidates of "Kanji (Chinese Character) of the Year"

By John Ito - August 09, 2011
Starting in 1995, Annually, Japan Kanji-Kentei-Kyoukai, a judicial foundation, pick out one Kanji (Chinese character) that represents each year by a vote of the people. In the majority of cases, Kanjis chosen by them are expressing big events or incidents occurred within a year that are unforgettable for years to come, for instances, 災: sai (incident) represents a quack, 蹴: shu (kick) represents World Cup and the like. 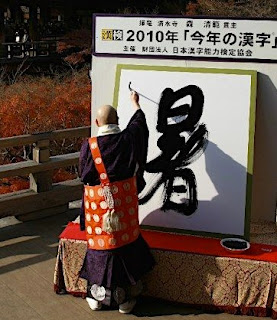 History of Kanji of the Year:

Too many unprecedented events already having happened this year, Japanese Net-users posted possible Kanji that might be chosen for this year on an electric board. Most of them, however, are too negative or pessimistic, representing the year of 2011.

Some of possible kanjis to be chosen this year Net-users posted: