iPod Classic Will Be Disappeared From the iPod Family?

By John Ito - October 01, 2011
While iPhone bears spotlights across the globe - experts make expectations on the roll-out of the next model that is expected to be held on October 4th - worlds's interest toward iPods gradually dies down in the face of the iPhone's rising. 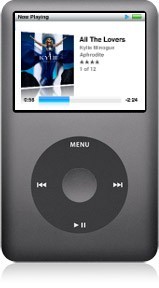 Among iPods, iPod Classic, which is sometimes called as "antique" as well as hasn't been updated for a couple of years, is rumored by some Apple fans that Apple would stop selling the model.
For a few great music fans who enjoy the model's as large as 160-GB-internal memory to listen to their music collections, the model has been a great music partner;  however, amid those advanced days - in which technologies are fast being developed - that make us feel that yesterday is like a century ago, old-time gadgets incapable to connect themselves with the Internet as well as cloud systems are probably destined to be disappeared from the front-line of the field despite the fact that the gadget shaped the times.
While such rumor is spread across the world, others claim that all of the next iPod models will allow their users to enjoy iCloud-based systems with wi-fi connections as iPod Touch has already done.