TIME: Difference Between the States And the Rest of the World 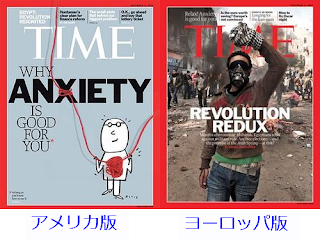 The left one is American version, and the right one is issued in the rest of the world.

Time is one of the most influential magazines in the world and has been disseminating millions of news to not only the States, but also the rest of the world.
The latest issue, however, caused a ripple in the world because of the fact that while the U.S. version of Time focuses on health-care, Time issued in the rest of the world covers current European crises that headlined world-widely.
Some suggest that Americans don't care about what is happening in the outside of their nation, or intentionally avoid covering topics related to "Occupy-Wall-Street" movement.
What do you think?