A Russian Newscaster Gave the Finger to Obama 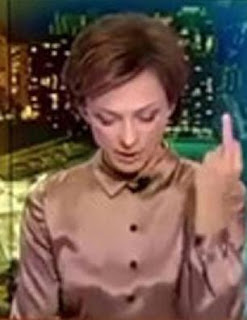 Tatyana Limanova, a Russian Newscaster, is fired after giving Obama the finger on the live TV show despite the fact that she won a national TV award.
On November 14th, In the middle of the news covering APEC (Asia-Pacific Economic Cooperation Conference) and President Obama, who joined in the conference, Limanova suddenly gave him the finger.
Since her behavior was unacceptable, especially in the West, she was fired as soon as the behavior coursed the ripple not only in Russia, but also the of the world.