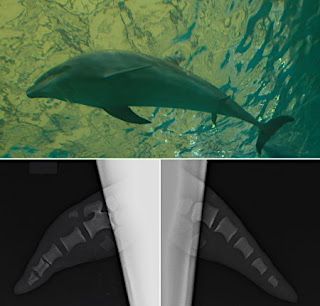 On November 14th, the research-team of Tokyo-Kaiyo University announced officially that they've discovered rare traces of legs on a dolphin's stomach; the dolphin was captured in Taichi-cho, Wakayama, famous for the oscar-winning documentary movie, the Cove.
In the latest research, cetaceans in the inclusion of dolphins and whales had had hind legs until they started to adopt themselves with oceanic environment.
Hideki Kato, the team leader, stated that this world's first discovery will help reserchers get an glimpse into the past processes in which cetaceans lost their hind legs as well as developed their fins instead.