The Number of Foreign Students in The U.S. Suggests Today's World Power Balance. 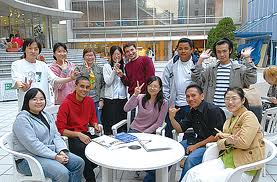 While the overal total of foreign students in the States hits an all time high since it has been recorded with 7.2 hundred thousand students, the number of Japanese students studying abroad in the States hits an all time low with as few as twenty-thousand students, projecting inward-looking attitude being spread among Japanese youth.
By nationality, Chinese represent the largest group with 15.8-hundred thousand students - increased of 23% over the last year - followed by Indian students (ten hundred thousand) and Korean (seventy thousand). The top three groups occupied 46% of the total.
With the fact that newly-rising countries, including China, India, South Korea and other nations in South-East Asia, are rapidly growing as well as are, when compared with a half-century ago, open to the rest of the world, younger generations of those nations that will be the future engine of the worldwide growth are trying to catch something invaluable in overseas while sunset-developed nations, like Japan, are gradually isolated from the world's heat-up waves.