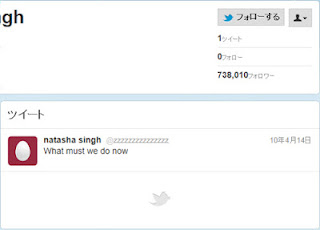 Believe it or not, a large number of Net-users around the world claim that a ghost drives a Twitter account, which is followed by as many as seven hundred thousand people on the site despite the fact that the account left only one tweet saying "What must we do now."
The mysterious account is managed by a Twitter user, @zzzzzzzzzzzzzzz, whose name is Natasha Singh, who was a real person as well as is claimed to die a tragic death when she was 31 in Delhi, India, in 2001; the case, however, headlined newspapers in the country in as late as 2010. For the record, Twitter was launched in 2006.
From the start, she had been suffered poor health, while she enjoyed her photographing career.
Her death itself is veiled in mystery. Police announced that Natasha probably committed suicide from the top of a Ninth floor of a hotel, where is separated by nine-kilometers from her hospital in which she was last seen alive. Police, however, said that they would keep investigating the case, for it might be a murder.
From January 16th, 2012, the account dramatically increased its followers in number and some argue that Natash hauls other Twitter accounts close. As far as visiting her Twitter account on your PC is fine, however if you visited her site via your smartphone, your account will automatically follow her; which might be the major cause of the rapid increase.
For the account is too creepy and scary, some rumored The Ring-esque urban legend on the Internet.
Is it a someone's prank or Natasha's ghost? It is probably too early for us to know the answer.