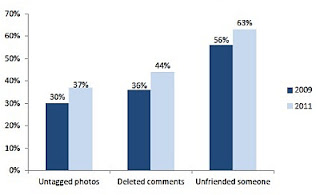 Especially woman and younger SNS users tend to work more on privacy management than others. From Facebook to Twitter and everything in between, we have tremendous numbers of social media services today, and they are replacing our old ways to communicate, even e-mail services.
According a poll conducted in 2011, 63% of social media users, however,  answered that they deleted users from their friends list; of which 67% was women, and 58% was men. The result showed the fact that the trend is growing at a fast pace, when compared with the poll of 2009.
Not only did they delete friends from their list, but also they deleted their comments and tags that identify their names on photos.
Of the all SNS users, 58% is hiding their page from the public, and 19% limit their page only on friends' friends. Only 20% use social media openly.
Even though the absolute goal of social media is to connect people to people, it somehow concentrates on circumstances at the expense of the main issue.