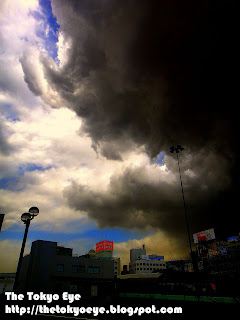 One week from the last major earthquake in Tohoku, people in Japan gave silent prayers to those who lost their lives in the catastrophe on 14:36, which none of Japanese has experienced ever until then.
"We are in the greatest postwar crisis ever," said Naoto Kan in his speech performed in the office of Prime Minister on March 18th, 2011. Once his speech was finished, a number of questions swirled around the office from Japanese media participating his speech, and the majority of such questions were about if the government has disclosed whole pieces of information about the Fukushima nuclear-power-plant to people in general. Prime Minister Kan answered right back without any specific example that they've discovered every piece of information to the public.
All the way through the days in which people in East-Japan suffer from the after-effects of the quake, the Diet failed in cleaning down the impression of skepticism about the transparency of information among the public. This, accordingly, is the result of the delay of informational discoveries of the office. Not only has the government struck out in warning for people living nearby the nuclear-power-plants about the hazardous nature of the exposure; they let false or exasperated pieces of information of the disaster leak universally, causing millions of foreigners living in Japan to experience temporal evacuations to their home countries.
While Japanese media claimed the disclosure of whole pieces pf information to the government, people in general have started to have skepticism toward the media as well if they have discovered the truth as well as what truly happens in the quake-hit areas. A blog written by a someday's celebrity answered their skepticism promptly. On the blog, a victim who survived the quake mention about a quake-hit area. According to the blog, in some disaster-affected areas in which media haven't had their eyes on, or intentionally have ignored, even adults make quarrels over getting food and drink as well as rob food, drink or goods off the gentler sex or children; the weak have no choice but pick fallen food on the ground up to live on; inferno took shape on those areas. "This is why the government doesn't allow individual volunteer to participate for helping the areas," said the person who provided the information to the blog.
The same thing actually happened during subsequent days of Kobe earthquake in 1995. Media from home and foreign lands reported that no orgy occurred on the quake-hit areas, respecting Japanese behavior that people in general help each other in straight forward manners. On out of sights of TV cameras and newspaper reporters, some of victims of the quake, however, beat each other up over limited food and drink, while female volunteers were raped on the areas. To save the universal recognition of Japanese spirit of mutual aids, none of Japanese media discovered such truth as well as this time.
The Japanese government's tendency of closure of information ruin the country itself. A French research station warned Tokyo to have another solution on the Fukushima nuclear plants drawing global attentions within 48 hours, otherwise Japan would experience another Chernobyl or something worse.
The time the Japanese government, media and people in general to face with the reality is coming closer.