This Is What Is War: Before-and-After Comparisons of Young Soldiers Who Experienced Wars

Those pictures were taken by Clair Felicie, a photographer. Young men in those pictures are Dutch bluejackets who went to Afghanistan. She has taken pictures of each of them three time - before, during and after their tour of duty to the country. She tried to capture what is lost from their faces after the war. 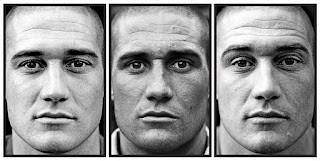