Into the in-between World 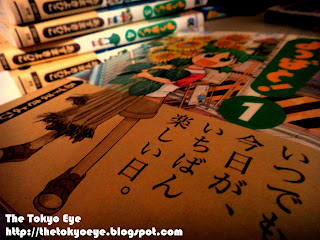 From electronic appliances to automobiles and everything in between, Japan has hailed around the world with its technologies. Along with such engineering products that represent the nation, Japan has exposed its cultures all around the world as well; however current products achieving mass popularity are not those represented by traditional woodblock prints, instead of that youth all around the globe is tempted to enjoy contemporary arts containing stories with detailed graphics, called "manga"- Japanese equivalent for comic.
With touches of humor and bitterness, mangas entertain not only youth but also adults. One of major reasons that mangas let adults to devour tons of them is because of the fact that they not only allow readers to have glimpse into lives of characters in imaginary and artsy-crafty worlds; they let readers to have a look at the reality we are living in.
Varying in categories, such reality mangas cover wide range of issues, including those about medical to soap-opera-like stories; the current behavior, however, is about ideal-and-clean realities in which people spend unspeakably mundane days. In such manga-world, characters exchange hellos and goodbyes with rhythmic breathing, and there are not even a scene which projects harshness of reality. Some argue that such trend is ironically a rebound on the real world.
Suffering from longstanding recession caused by the asset-bubble burst occurred in the '90s, Japanese call '90s as "the lost decade." As if to mirror the social circumstance, Japanese has tended to have unreality in the reality. As a result of that, such behavior has become the major stream of current manga-publicities.
Is this psychology universal?