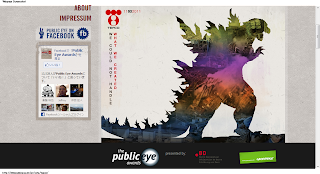 A Swiss NGO, Berne Declaration, and Green Peace hold the Public Eye Awards, for which companies considered as the worst ones due to certain reasons are chosen and nominated willingly or unwillingly.
Of the six candidates of the winner of the awards this year, the most voted company is TEPCO (Japan), heading the list; and Freeport (U.S.), Barcyays (U.K.), Samsung (South Korea), Syngenta (Swiss) and Vale (Brazil) are also nominated.
Except for Japan's TEPCO, companies on the list posted their statements on their web sites that they have no call to be nominated for the awards. Among them, what TEPCO has done to Japan and the surrounding countries can't be compared to that of other candidates. Some argue that maybe TEPCO doesn't know about the awards or simply become speechless due to what they have done to the oceanic environment as a whole.