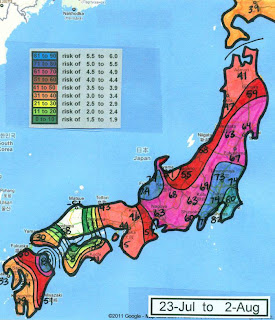 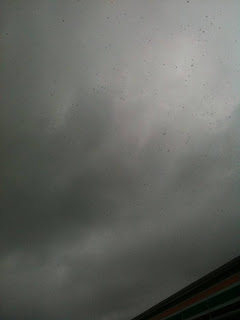 The largest earthquake and tsunami occurred in Tohoku area, Japan is still fresh in our minds; though an American system predicting quake-occurrences newly set Bousou peninsula (blue-colored are in the picture) locating in the south-east of Tokyo as the riskiest area of a massive quake-hit. According to the system, another earthquake could occur in the period between July 23 to August 2.
As a prediction of the possible quake-attack, a cluster of bugs suddenly appeared in the Sky of Bousou Peninsula a couple of weeks ago; the news was spread on the Internet in an eye's blink.
"This is a bulletin on the end of the world," posted a Japanese Net-user jokingly.
If the predicted earthquake truly occurs, destroying the heart of Japan, Tokyo, the nation will loose its engine to sustain its economy, politics and so forth.
Source(s)
http://hamusoku.com/archives/5400105.html
http://hamusoku.com/archives/5353603.html
Earth-quack Greater Tokyo Tokyo